Having sold our B&B Yacht Designs Core Sound 17, and having been been without a boat for a year, it was time to start on the next build.

Initially, I had wanted to build a CS17 Mk3, which has a cabin, but when the plans arrived I discovered that the plans had been updated, and was now a few inches wider than had been detailed on the B&B website. It doesn't sound like much of a change, but it was enough to make the boat unable to fit down our driveway. So, back to the drawing board...

I could have built another CS17 Mk1, or a CS15, but I was taken by the B&B Yeach Designs Lapwing 16, a glued lapstrake cat rigged ketch. Slightly smaller than the CS17, it appeared to have everyting I liked about the CS17, but with a more traditional feel.

The following pages will detail the build of our Lapwing over the course of 2020, and into 2021. Perversely, I was able to get lots of work done in January and February, but as the COVID-19 pandemic has unfolded I have had less time to work on the boat, so progress has slowed down somewhat. This is a sligntly modified version of the design, as, after consulting the designer, I am not adding the decking, and opting instead to keep the boat completely open. 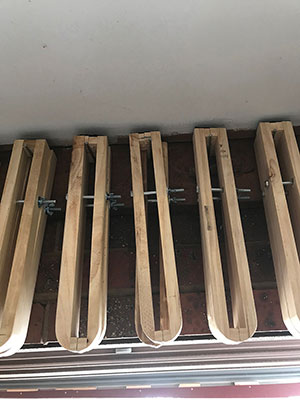 I am currently in the early stages of building a Lapwing, a 4.77m glued lapstrake cat ketch design from B&B Yacht Designs. My last boat was a Core Sound 17, another cat ketch from B&B, which I sold a year ago. I’ve not built a glued lapstrake boat before, so I’m picking up a new set of skills and enjoying myself immensely.

This glued-lapstrake design uses a number of bulkheads that are part of the boat, instead of a strongback, plus a couple of temporary frames, all propped up on a pair of home made saw horses. In building this boat I’m remembering the joy of using well-sharpened planes and chisels, and the effectiveness of a nicely curved filleting stick! 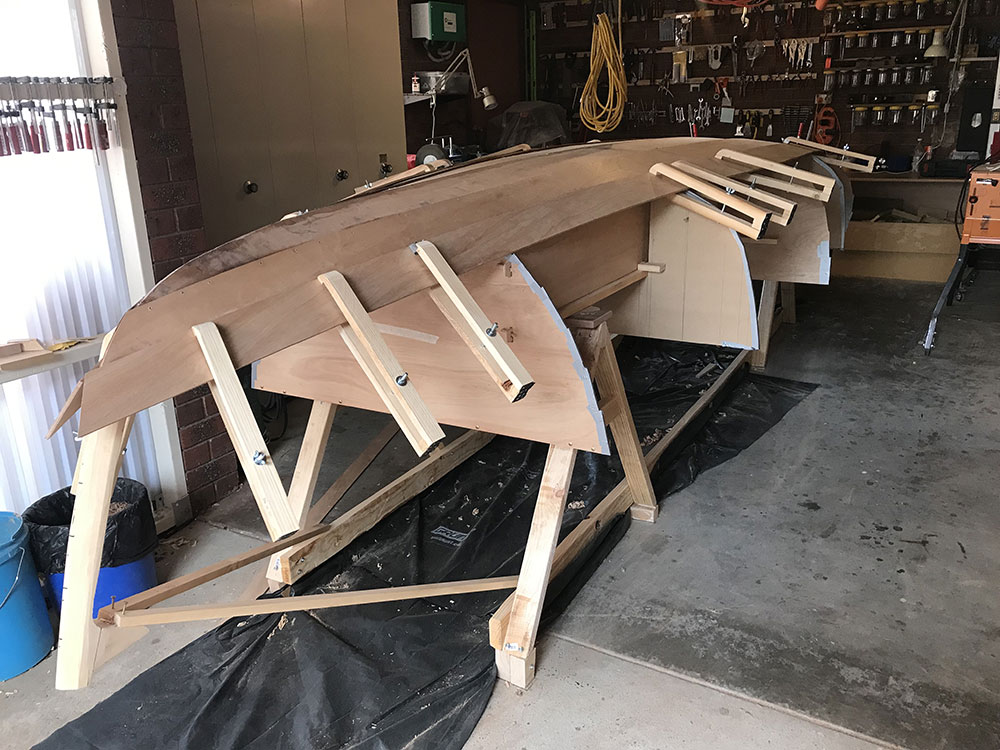 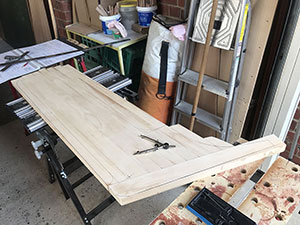 Work continues on the boat, and I am happy with the progress I have made over the last month. The keel has been fitted, and there’s been sanding – lots of sanding, and it is all being done with a sanding block! I’ve spent a fair part of my time on the boat this month sanding the hull (music in the garage is a great help), and once I was happy with that, I applied three coats of epoxy. I was fortunate to have a warm weekend to do this. The first coat was rolled and brushed on the first day, and the second and third coats were applied on the second day. By not delaying more than 24 hours between coats I didn’t need to sand before adding more epoxy. Using a roller, and tipping out with a brush, resulted in a good finish. Less pleasing was variation in colour of the ply where I had sanded through one layer to another at the scarfed joints, around the lands at the bow, and where screws had been used to pull planks together. This wasn’t so noticeable when it was sanded, but coating the ply with epoxy has highlighted these flaws. 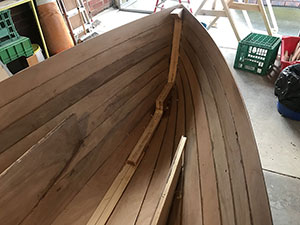 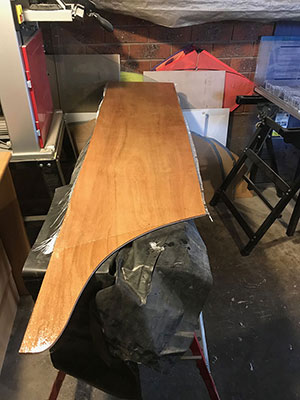 I’ve managed a couple of good weekends working on the lapwing in the last month, plus the Queen’s Birthday holiday, so definite progress has been made!

I removed the gunwales, glued the laminates together, taped the planks, and reinstalled the gunwales, to let the epoxy set whilst holding the timbers to the correct shape. In a seek or two I’ll remove them once again and sand them again, and apply the Deks Olje that will be used to finish them. 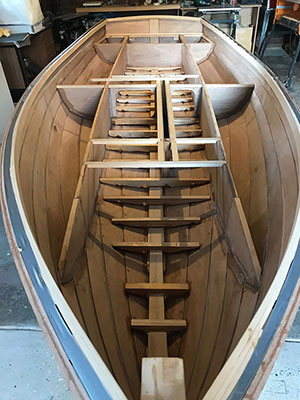 The weather’s been colder, and it’s getting harder to pump epoxy from the containers. I’ve made a hot box to keep the containers in, and I’ve been using a low-powered light bulb to maintain a reasonable temperature in the box during the week, and then for the weekend I use an incandescent bulb given to me by Chris, to bump up the temperature a bit, to get the epoxy up to a better temperature for pumping, but also trying to not let it get so warm that during the curing I see any amine blush caused by the falling temperatures. 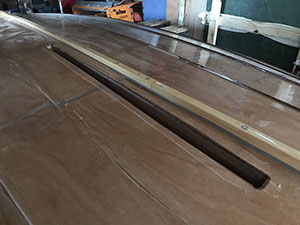 Whilst procrastinating over what colour to paint the hull, I spent some time building a jig for cutting the birdsmouth profile in the strakes of Oregon that will be used to make my masts. The back of the fence on my Triton workbench is set at 45 degrees, with a lip at the base to support timber before and after it touches the saw blade. Reversing the fence, so that the diagonal side comes up against the blade gave me an easy way to make the 45 degree cuts needed in one edge of the strake. 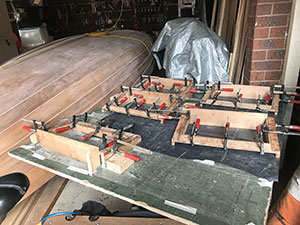 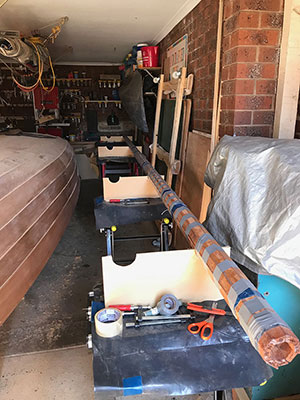 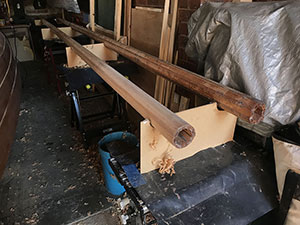 This month I continued working on the masts for my Lapwing. I decided to sand the first mast before planing the second, and made some handles that could be clamped onto a length of sandpaper. It was then just a matter of working my way along the mast, pulling the sandpaper back and forth until an area was sufficiently rounded, and then rotating the mast to work on the next length.

It was slow, dusty work, but very satisfying to see the masts take shape and the colour of the timber reveal itself. 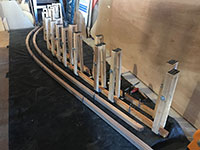 During November I didn’t get as much done on the boat as I would have liked. Work keeps on getting in the way, and as I rather like the idea of a bank account that is going up rather than down, I find it hard to say no to my clients...

I did manage to start work on the wishbone booms, and ordered my sails, so there has been some progress.