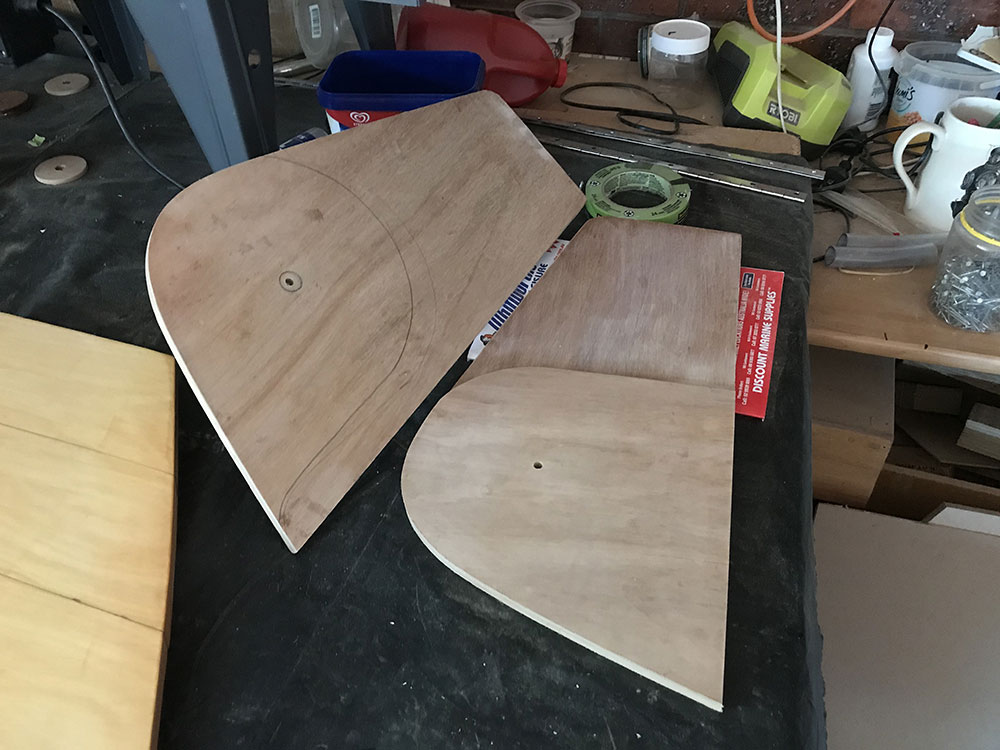 The finish line is in sight, but I seem to be slowing down...

The rudder has been shaped and coated in epoxy. The rudder cheeks have been glued, and now that the rudder blade is finished I can cut the timber inserts and finish off the rudder stock. The plans call for a copper tube through this insert, used for the rudder downhall. A piece of old copper water pipe was found under the house, and will be fitted shortly.

Rather than using a thwart to mount the main mast partners, I decided to combine the mast partner with an enlarged breasthook, which also gives me a larger surface to stand on when stepping off the boat. I haven’t decided what to do with regards to holding the mast in the partner. That’s for later this month.

My trailer arrived last month, in 8 boxes. After a day of head-scratching and tinkering, I had a trailer that is large enough for the boat, and narrow enough to fit down our driveway. The supports for the bunks had to be shortened, to allow the keel to sit on the rear roller, and the bracket for the winch will need to be extended a bit, but all in all, I’m pretty happy with how this has worked out. The trailer went together with three spanners, a screwdriver, and a rubber mallet.

I ordered most of the chandlery needed for the boat earlier in the month. The plans specified some items that couldn’t be sourced here, so they had to come from Duckworks, in America.

Although everything was ordered at the same time, the parcel from America arrived first, closely followed by two parcels sent within Australia by courier services, and finally one parcel that arrived 10 days later via Australia Post.

The floor boards were drilled, countersunk, and sanded, and then several coats of Deks Olje were applied. After a few days to let this fully dry, the boards were screwed in place - a lot of time spent bending over! When I lifted the boards I numbered each on the back, which made finding the correct board for a particular location simple.

The first items of the hardware to be used were eye straps and blocks for the uphaul and downhaul on the centreboard. The centreboard was then installed, using a stainless steel pin as the pivot, and end caps screwed and siliconed in place to stop any leaking around the pin.

Last weekend we picked up the sails, from Peter Green. I’ve gone with sleeves again, making setup very simple. I’ve measured the sails on the mast, to work out how long the wishbone booms should be, so next weekend I’ll cut and glue the booms together.

The holes in the tops and bottoms of the masts have been plugged, and will have a couple more coats of epoxy added in the next week or so.

With a bit of luck, this weekend I will reinstall the rubrails, finish off the rudder, start on joining the booms, and laminate the pieces for the tiller.