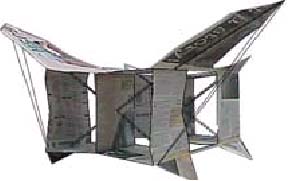 This newspaper Cody won the Best home-made kite at the Victorian championship in 1997. It couldn't be entered in the newspaper event because it was not made from a Ballarat Courier. The spars I used were of two millimetre fibreglass but bamboo skewers could be substituted. Approximately four metres of fibreglass is used in this kite. 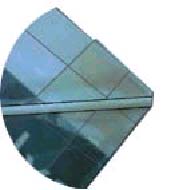 The kite is actually very simple to make and I was able to make one in approximately two hours including time for developing the plan.

The edges of every section have been covered with sticky tape. This makes each edge very strong. On the straight edges I have folded the sticky tape over to make a very strong edge. The curved edges have had small pieces of tape applied so that I could easily go around the curves. Although the kite is quite small, it was capable of taking several hundred feet of twisted nylon flying line.
It is quite stable, provided that you adjust the rigging lines on the wings to sit flat. 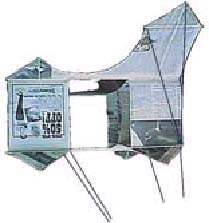 The  bridles should be made of three pieces of line. Two of these should be 90 cm long and the third should be 50 cm long. Use an upholstery needle to thread one end of one of the long lines through the newspaper and around one of the bottom spines at the front of the lead cell, and then thread the other end of that line around the spine at the front of the other side of the front box cell. Use the other long line to do the same to the front of the rear box cell. Tie one end of the short line around the centre of the line connected to the front cell, and the other end to the centre of the line connected to the back cell. If you tie the line in a slip-knot it can be slid along the front and rear bridles to adjust the stability of the kite. The bridling point for this kite should be on this shorter line, roughly 20 cm back from where it is tied to the lines on the front cell. 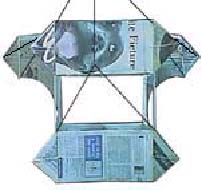 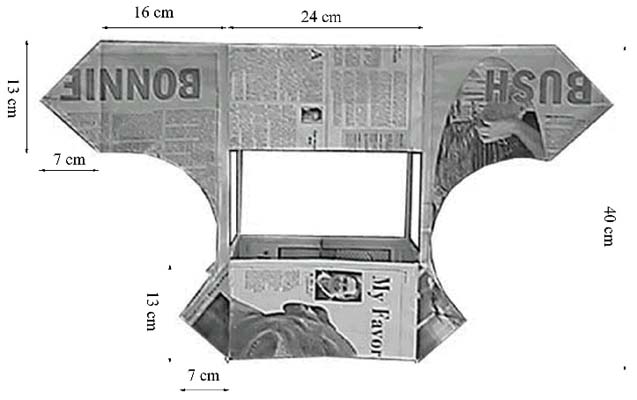 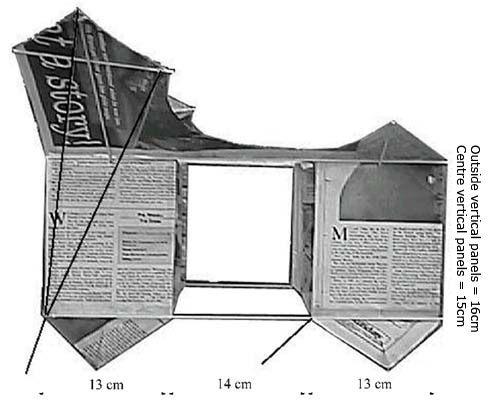 These kites are actually quite simple to make, and look great. I found that this one flew very well, even in quite light breezes. It remained stable in quite strong winds as well.